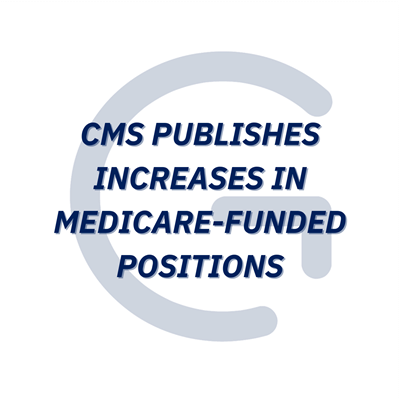 Section 126 Awardees, within the Consolidated Appropriations Act of 2021 (HR 133), were recently published by the Centers for Medicare and Medicaid Services (CMS). You can download the Section 126 Cap Increases Round 1 results here; along with CMS’s own publication, here. HR 133’s Section 126 aims to create 1,000 new funded residency positions; whereupon 200 slots would be awarded every year for 5 years. Teaching hospitals applied for these positions, and they could not be given more than 5 funded positions per application cycle (25 in total). With the release of Section 126 applicant and awardee information, Germane hopes additional teaching hospitals are aware of the application and that this legislation will prompt additional efforts to increase Medicare-funded positions.

Section 126 is the only time since 1996 where cap, or funded position, increases were available in mass (previously, only the redistribution of funded positions, not increases, has been achieved through legislation).

If your hospital is interested in applying for the second application cycle, Section 126 applications will be due on March 31st, 2023, and become effective July 2024. Applications will be due in each subsequent March until Section 126’s 5-year period concludes. Applicants in Health Profession Shortage Areas (HPSA) are prioritized throughout the application process.  To be eligible to apply for this Section 126 increase, your hospital must meet one or more of the below, summarized criteria (found here): Lastly, more information on HR 133, and its GME-relevant sections, can be found in this Germane publication.
Back to Articles